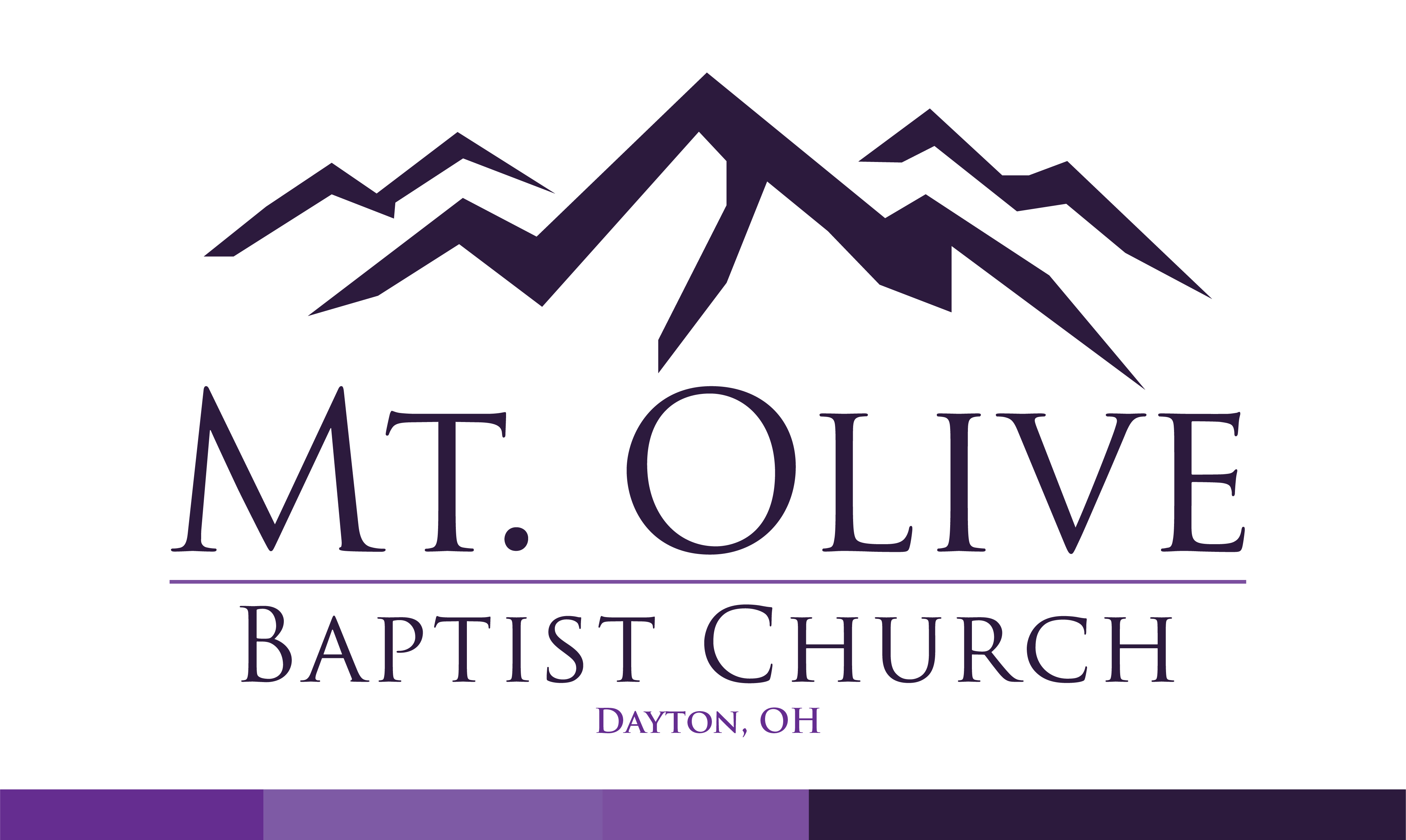 In the early 1900’s upon the request of several people for a Sunday School and mission to be organized within their area, Zion Baptist Church, the first and only black Baptist Church in Dayton, Ohio, organized a committee to survey the church needs of the black community.  It was the finding of that committee, which led to the creation of a Sunday School, a Prayer Band, and later a mission.  On January 31, 1903, the small mission in a meeting at 918 Germantown Street became a full-fledged church bearing the name of Mount Olive Baptist Church.

As an infant church, Mount Olive’s first pastor, Rev. R.D. Grant led the church until 1906 when he was succeeded by Rev. L.W. Beatty, Rev. C.C. Harper and Rev. R.T. James.  In 1908 under the leadership of Rev. F.L. Tate, Mount Olive established stability in the community.  When Rev. Tate arrived in 1908, the small church had only 18 loyal members. The vigor with which Rev. Tate set about changing the pattern of Mount Olive’s growth reflected the vision of greatness that he foresaw as her destiny.  It was under the direction of this pastorate that the decision was made to move the church to Homestead Avenue in Edgemont where services were conducted in a house until the lot at 502 Pontiac Street was purchased in 1913.  Shortly thereafter, construction was begun on a new church home for Mount Olive Baptist Church.  This new white frame building was one of the first black churches to be built in the city of Dayton.

Though World War I was heating up and poverty prevailed, Mount Olive’s members labored unceasingly and with a sense of pride in their achievements.  Young men went to war in defense of their county.  Those who remained behind weathered the resulting economic chaos even though they were still burdened with payments on a building which had begun in 1913.  But in the midst of one of America’s most devastating economic crises, the final payment was made on the first Mount Olive Baptist Church physical structure in 1920.

Through it all, Rev. Tate and his little band of followers went one important step further and declared, “Come ye disconsolate, wherever you languish; come to the mercy seat, fervently kneel; here bring your wounded heart, here tell your anguish, earth has no sorrow that heaven cannot heal.”  Rev. Tate and his faithful few continued to lay their all on the altar of God.  Their means were meager, but God, ever true to His promise, multiplied these pitiful offerings.

For the next seventeen years, Rev. Tate and Mount Olive struggled for survival against seemingly insurmountable odds in an economically disadvantaged and crime-ridden community.  But they were steadfast in their commitment.  A pure and uncompromising gospel was preached and souls were being won for Christ.  The steeple of Mount Olive became the symbol of hope to the Edgemont Community.  But God, in His infinite wisdom, saw fit to allow Mount Olive to suffer a temporary setback.  In 1937, Rev. Tate was called from Labor to Reward, and once again Mount Olive was plunged into a spiritual depression.  For the next seven years, the church was served by a succession of short-term pastors which included; Rev, Hall, Rev. Mays and Rev. Gaines.

Because of a lack of steady leadership, the already small congregation was further diminished.  But God, who sees even a sparrow that falls, had His eyes on Mount Olive and was preparing it for bigger and better endeavors.

In February of 1944, with a membership of a mere 12, Mount Olive called Rev. David W. McFarland as its pastor.  This small congregation was in contrast to the 18 members who greeted Rev. Tate in 1908.

At last, Mount Olive was growing again, numerically, spiritually and financially.  But with growth comes growing pains.  The first priority appeared to be in the area of space.  Because of the increase in employment opportunities in defense industries at the outset of World War II, there was an influx of southerners seeking a better life in the north.  Mount Olive received its share of those immigrants and in the late 1940’s and early 1950’s there appeared whole families in the congregation from Alabama, Georgia, Mississippi, Louisiana, the Carolinas, Tennessee, Kentucky and all points south, they came and as they came across the Mason and Dixon line, they brought their most prized possession: that “ole time religion”.  The church rolls began to grow and it was through this expansion and the liberal giving of many of the families that Mount Olive was able to climax its second twenty-five years with positive plans for a complete building program.

The first fifty years of Mount Olive’s history recorded numerous setbacks and disillusionments, but the hopes and aspirations of those early pioneers came to full fruition in July of 1954 when ground was broken for the completely modern edifice in which we now worship.

During this period of expansion, Mount Olive remained true to its unchanging purpose:  to spread the message of salvation.  More and more young people were added to the church and in addition to making a dynamic contribution to church growth, these young people were making themselves heard in the schools and other segments of society.  As an example, Mount Olive’s lone high school graduate in 1949 was Sister Bernice Tripp.  In 1964, Mount Olive boasted of sixteen high school graduates, five of them being members of the National Honor Society.  This trend continued and Mount Olive boasted of a wide spectrum of professional members including public school teachers and administrators, funeral directors, policemen, aerospace engineer, Local, State, Federal and Government employees, nurses, attorneys, beauticians, barbers and a large number of members who were successfully engaged in operating their own private businesses.

Because of this influx of youthful workers, Mount Olive’s training programs underwent a complete and drastic innovation with the establishment of a Department of Christian Education to oversee and insure the effective functioning of the Sunday School and Baptist Training Union, plus organize and staff a Junior Church team to train and prepare for regular worship for children through the age of twelve.

Mount Olive was still growing and it was soon evident that once again more space was needed to accommodate the increased membership and training emphasis.  In 1964, the first in-house monthly magazine was published by Sis. Pauline Goggins and Deacon Billy Young. A massive complex building program was initiated to add an educational wing to the existing structure as well as provide a parsonage to house Mount Olive’s present and future pastors.  The parsonage was built on a parcel of land located at 4810 Dayton Liberty Road.  A mortgage burning ceremony for the church and parsonage was held on February 23, 1975 which signaled the debt-free status of this three part building endeavor.

Mount Olive approached the Diamond Jubilee year – 1978 with enthusiasm and a sense of pride.  On the third Sunday in January, 1978, Mount Olive celebrated its 75th birthday.  That year saw the modernization of the parking lots as well as purchase of land adjacent to and near the church.

In 1980, a Food pantry was established to provide food and clothing for those in need in the community.  Sis. Willie B. Spear and Sis. Bernice Tripp and countless others worked tirelessly since its inception greeting those in need with not only nourishment for their bodies, but also food for their souls.  Also, in an effort to help people in need right here at home, a scholarship fund was created in 1987 to help the youth of our church family pursue a higher education.  The scholarship committee has awarded dozens of students, thousands of dollars in financial aid.

In May 1993, Pastor David W. McFarland retired and became Pastor Emeritus after rendering 49 years of faithful service to the church as pastor.  With his retirement came a void in leadership. There was a lot of controversy, confusion and turmoil on whether or not Rev. Shropshire would become Pastor.  There was so much confusion that Rev. Shropshire was removed from the church.

In June 1994, Rev. Theodore McFarland, Jr. was called to Mount Olive.  Under his direction, many new ministries were instituted. After undue hardships for the church, Pastor T.H. McFarland, Jr. was removed as pastor in 1998.  In 1999, Rev. Morris Goggins, Jr., was called to be pastor of Mount Olive.  Pastor Goggins served until 2004.  Again after much turmoil among the church, he was removed as pastor.  As the process to receive yet another Shepherd got under way, Associate Minister Joe Owens, Sr., faithfully stepped into the position.

After much prayer and consideration, and after seeking Godly men who had Mt. Olive’s best interest at heart, Reverend Carlton Williams was determined to be the angel of God; the Shepherd Mt. Olive had longed for.  Rev. Carlton Williams was installed as Pastor in August 2006.  Under the leadership of Pastor Williams, many souls have been fed.  Many improvements and renovations were made.  This included the new design of the sanctuary, the elegant design of the social hall, the upgraded kitchen, remodeled restrooms and administrative offices, the visual arts and sound system and the Cyber Café just to mention a few.  Also included is the re-vamping of the Christian Education Department and the Department of Worship Arts.  Through obtaining grants and his other interests, Pastor Williams was directly responsible for the One Stop Program, the HIV/AIDS Prevention Program and Awareness Training in Mental Health of Adults and Children, all of which was directed to aid the church and community.  Mt. Olive is also host to AA Meetings and the Edgemont Community Development Group.  Over the past 3 ½ years Mt. Olive has operated a “garden” to supply fresh vegetables to the church and community.  This was a very productive endeavor.  Pastor Williams has continued to serve God and preach and teach the Word.  He strongly encourages our young black men to strive for excellence, keeping God first and to follow the Will of God.  Pastor Williams’ contributions and many projects have been beneficial to the physical and spiritual growth of the church and to our quest to serve the community. Under Pastor Williams’ leadership, there are 7 ministers, 5 of which are women.

Mt. Olive’s History is one of faith, prayer, sacrifice and hard work.  Under the direction and leadership of the Holy Spirit, the Promising Word of God and the determination, dedication and sacrifices of our current leader, Pastor Dr. Carlton Williams, we will continue to build on our rich spiritual heritage. “Upon this rock I will build my church and the very gates of hell shall not prevail against her.”  The Mt. Olive Baptist Church was built on that rock!

And as we celebrate 117 Years, we will be anxious for nothing but in everything be prayerful.

“I beseech you therefore, brethren, by the mercies of God, that ye present your bodies a living sacrifice, holy, acceptable unto God, which is your reasonable service.

And be not confirmed to this world; but be ye transformed by the renewing of your mind, that ye may prove what is that good and acceptable, and perfect will of God.”